The City of London's annual Lord Mayor's Show, the largest free procession in the country, has been cancelled this year due to the pandemic. The show has not been cancelled since 1852, for the funeral of the Duke of Wellington.

Professor Tracey Hill, in association with the City of London and the Worshipful Company of Haberdashers, is going to 'live-tweet' the show held in 1620 for the Haberdasher Lord Mayor Francis Jones, on the traditional inaugural day of 29 October. She will be using the original 1620 pageant book, the title page of which is shown below, as well as photos, videos, and even a recording of the song composed for Jones's show which has not been performed for 400 years.

Earlier this year, Tracey published a blog post detailing the parallels between the current COVID pandemic and how London coped with epidemic disease in the 1600s. 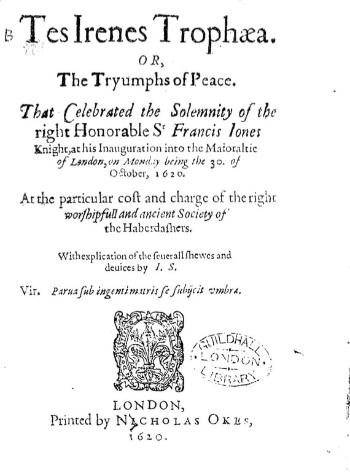