Held at the city’s 18th century Assembly Rooms, the Bath Graduate Fashion Show saw final year Fashion Design students rallying together to fundraise £8,000, which included donations made via the University’s crowd funding hub, Launch Pad. This was then added to contributions made by first and second year students, bringing the total amount to £21,000.

Graduating students also successfully applied for monetary support from the University’s Enterprise Showcase Fund which matches any funding already raised. All of this enabled the talented team to showcase their handiwork to an audience of fellow University students, staff, savvy fashionistas, local businesses, friends and family.

Graduates whose work was exhibited on the catwalk by professional runway models included: 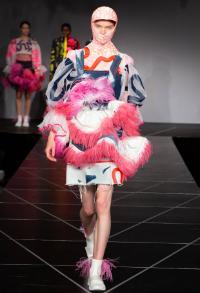 Charlotte’s collection was inspired by the BBC’s Blue Planet II series; her bold and brightly-coloured collection was designed in response to the pollution of the oceans and subsequent bleaching of coral. Charlotte used print, reclaimed denim and vinyl to represent plastic, and an abundance of ostrich feathers to create movement, the collection also featured a ‘bleached’ white finale outfit.

Charlotte is also one of just 10 finalists in a British Fashion Council and Stradivarius competition, the winner of which will be announced later this year. She has also been shortlisted for a design position at high street fashion retailer, River Island. 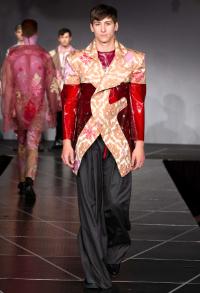 Jack’s collection is inspired by the story of Cynthia Payne’s brothel that she ran from her south London home in the 1970’s. Jack’s modern reimagining of her story resulted in a collection that combines latex with sophisticated tailored menswear. Jack has also been announced as a finalist in a design competition for clothing brand Desigual, headquartered in Barcelona. 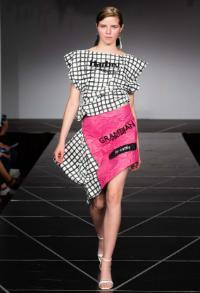 Jessica grew up on a farm in Perthshire and united her love for fashion and farming by turning feedbags into tops, skirts and dresses. Jessica gained permission from Harbro to use their original feedbag graphics and incorporated the checks, cows and sheep in her designs which were then embellished with thousands of rhinestones.

Louise Pickles, Course Leader of Fashion at Bath Spa University, added: “This year’s collections have been more diverse than ever. Our students continue to push the boundaries of fashion by creating personal and innovative collections while maintaining highly professional product realisation. Thank you to all those who made this year’s event one to remember and well done to our next generation of talented fashion designers. Everyone should be very proud of what they have achieved, and we look forward to following their next steps into the fashion industry.

“I would also like to give a special thanks to Bath and North East Somerset Heritage Services, BA1 Hair, makeup artists for Bobbi Brown and all staff at the Assembly Rooms for their continued support, without their help our annual shows would not be possible.”

The Fashion Design course at Bath Spa University has a track record for producing successful designers and product developers. Last year’s graduate Laura Gillings recently worked under the mentorship of designer Henry Holland to produce Sainsbury’s Tu Spring Summer 2018 range. A number of graduates have gone on to work with brands such as Givenchy, Adidas, Tom Ford and many more.