Creative Corporealities is an interdisciplinary research group that responds to a contemporary revision in notions of humanity, felt both viscerally and intellectually, for which the predominant answer is embodiment and creativity.

We are practitioners and academics working across a wide range of disciplines, based at Bath Spa University, with research themes accommodated under the banner of the Centre for Cultural and Creative Industries. Creative Corporealities concerns itself with embodiment as a source of creative practice, with its own causalities and politics. We develop and observe disciplinary practices that engage and affect a body that is generative of creative processes.

We are also on the steering group for the Research Centre for the Environmental Humanities, representing performance and arts research.

Below are a series of presentations by members of the Creative Corporealites research group and outside guest speakers, supported by Bath Spa's Quality Research funding. Please also see our Past Events page for an archive of these performances.

Unless otherwise stated, our events are free and open to staff, students and members of the public. Our public lectures are likely to be of broadest interest, while research seminars are intended primarily for staff and postgraduate students.

Objects Without Borders: Exploring how objects connect across borders, boundaries and difference

Thursday 20 January, 6:00pm - 8:00pm
Online
In this presentation, Bath Spa University's Dr Laura Purcell-Gates and PhD student Husam Abed will discuss Objects Without Borders, a practice-based research project that investigates the role of puppetry and object performance in connecting people across borders, boundaries and differences. The project draws on the knowledge and experience of people living on and between the borders and boundaries of society including refugees and people from deprived communities.

Our researchers are engaged in projects that have been funded by organisations such as the Arts Council England and the National Lottery Heritage Fund.

19-21 November 2021
How do we articulate somatic-informed practices as sensitive tools for social and political transformation? How do we address hidden and embodied ideologies, modes of exclusion, oppression and privilege within our growing field? How do we take responsibility for mobilising, activating and organising meaningful ethical embodied interaction in a rapidly changing world? How do we move beyond a historically inscribed ‘whiteness’ of the field towards a making space for global-majority bodies of culture? How can somatic practices contribute toward a re-embodiment of attention and sustainable human interaction with a living world?
BODY IQ Festival Berlin 2021 aims to address questions of embodied recovery and revisioning in the context of global ethical, social and ecological crises and change. Somatic practices have moved beyond a field of sensorial, experiential and emancipatory learning into wider educational, therapeutic, artistic and social-justice contexts. Body IQ Festival recognises the urgent need for meaningful re-embodiment of increasingly digitalised cultural communities in a pandemic and post-pandemic world.
BODY IQ Festivals have been hosted by Somatische Akademie Berlin in dialogue with international partners since 2015 as a forum for critical engagement with practices of embodiment in socio-political contexts.

Sonic Dancer, A Creative Exploration of Technology, Presence and Movement

From a collaboration that started at the Talent Development online workshops part of the SWCTN, Movement Artist Silvia Carderelli-Gronau and Computer Scientist Swen E. Gaudl have been developing a sound based framework that enables dancers to move and improvise with each other from different locations, creating a network of presence, connection and touch beyond the visual sphere. View the performance.

Silvia Carderelli-Gronau is a dancer, filmmaker, teacher in HE, researcher and movement therapist in Bristol and Bath. She has been developing a sound-based framework called "Sonic Dancer" that enables dancers to move and improvise with each other from different locations, creating a network of presence, connection and touch beyond the visual sphere. Silvia will be using the Bath Spa Studio Recovery funding to take the project to the next phase of development and testing. Silvia is a Studio resident.

The Imagining Body in Performer Training: The Legacy of Jacques Lecoq and Gaston Bachelard

Bath Spa's Ellie Nixon is currently writing a monograph titled The Imagining Body in Performer Training: The Legacy of Jacques Lecoq and Gaston Bachelard as part of the Perspectives on Performer Training Book Series, to be published by Routledge in 2019.

This is the Land - Performance

This practice-based research project entitled This is the Land, is an investigation of Derrida’s concept of Hauntology in contemporary performance practice, with a particular emphasis on cultural theorist Mark Fisher's analysis of Hauntology. Supported by Bath Spa University HEQR Seed Funding.

It aims to explore how embodied interdisciplinary processes of making performance proceed through a dramaturgy of haunting. This is the Land  takes the premise that the UK is haunted by the past and by possible futures that never came to be. The figure of the ghost is a regarded as a disruptive force, its act of haunting reveals that which is hidden or excluded from history. The research questions notions of heritage and inheritance, identity, and belonging in turbulent times. What has been lost or exluded in the past, which returns as spectral presence as a reminder or remainder of how we can live differently, imagining a future beyond the ones we are given?

The project is a creative collaboration with five professional performers, all of whom are Bath Spa University Alumni across the disciplines of Music, Dance, and Theatre. A professional musician is involved in the creation of the soundtrack for the performance. The outcome of the research will be a performance presented in collaboration with Bath Spa Productions in the in March 2022. Planning is underway to tour the production to UK venues in the Spring/Summer of 2022.

This performance was featured as part of a major exhibition at the Theatre Museum Vienna in March 2019.

Displaced/displayed re-activates the legacy of Viennese choreographer Gertrud Bodenwieser (Vienna 1890 – Sydney 1959) and her dancers within a context of global transmission of dance knowledge through crisis, diaspora and exile. This installation coincides with the 80th anniversary of Bodenwieser’s exile from Europe and celebrates the possibility of a nearly lost avant-garde to remain.

It builds on artistic research undertaken by Kampe and Brown between 2014 and 2017 (‘Releasing the Archive’, Auckland, Berlin, Hannover, Bath, Tel Aviv and Vienna) in collaboration with The New Zealand Dance Company and international scholars. The installation draws on video footage of choreographic work developed through the re-enacting of archival material of ex-Bodenwieser dancers Shona Dunlop-McTavish, Hillary Napier and Hilde Holger. The installation explores practices of displacement, doubling and fragmenting of recorded material to echo and honour the labour of lost modernist dancers and dances of exile. 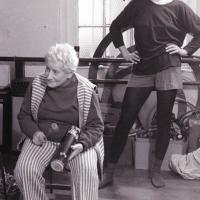 Basement Dances is a research project that aims to document, archive and disseminate traces of creative practice of the late choreographer, dancer and pedagogue Hilde Holger (Vienna 1905 – London 2001).  Holger was a prominent Jewish choreographer and educator. Holger’s choreographic work has been archived through reconstructions by Aggiss, Stange, Kampe and Kappenberg (1990 -2006), and her work has been critically discussed  in academic contexts (Aggiss 2006, Kappenberg 2006, Kampe 2006, 2013, 2019 , Waltz 2019 ) in relation to Jewish diaspora dance practices and the development of UK Contemporary Dance.

Basement Dances draws on up to 50 hours of video recordings filmed by Kampe, Kappenberg and others in Holger’s basement studio during the 1990’s recording her pedagogy, creative practice and reflections, on personal recollections of her students including Kappenberg and Kampe who worked with Holger over a period of 13 years until her death in 2001.

Projected outcomes over the next three years will be a series of published articles or video essays, an interactive website honouring the nearly lost legacy of the pedagogy and creative process knowledge of Holger, and screen-dance installation based on the archival footage.

The project builds on Kampe’s recent research on the work of choreographer Gertrud Bodenwieser (1890-1959) who was Holger’s mentor in Vienna up to 1938, and on Kappenberg’s research into the mediation of dance and discourses in screendance.

The project has been funded with BSU HQR seedfunding.

Beyond forgetting - persecution/exile/memory: transdisciplinary perspectives on design, performance and education.

Kampe, G and Kampe, T, eds. (2021) Beyond forgetting - persecution/exile/memory: transdisciplinary perspectives on design, performance and education. Cuvillier Verlag, Goettingen. ISBN 9783736973107
This book explores the intersection between Performance Practices, Critical and Expanded Design, and Memorial Culture, exploring cross-disciplinary working modes and educational models in response to contemporary and historical persecution and exile. It aims to contribute to the field of Experimental and Expanded Design by probing embodied practices as socially pertinent process-oriented modalities of problem-solving and education.
The collection of essays and student projects in this publication gives an insight into the possibility of responding to hidden and reluctant histories of persecution and exile through visual, performative, conceptual and interactive means.
With contributions by: