This talk will be delivered virtually and in person. There are a limited number of in person tickets available strictly for students and staff of Bath Spa University.

Racial categories feel tangible, but as we know from genetics, they are no more rooted in biology than they were hundreds of years ago when they were arbitrarily invented by European scientists who were affected by the politics of their time. Yet scientific myths about human difference live on today in disturbing ways.

As ethnic nationalism rises around the world, race science is experiencing a revival on the far-right, fuelled by the abuse of data and facts by politically-motivated groups. Even well-intentioned scientists, through their lazy use of old-fashioned categories, inappropriately imply that race has some innate basis. We forget to our cost that race was never about biology but always about power. 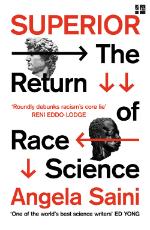 Angela Saini is a British science journalist, broadcaster and author. Her work has appeared in Science, Wired, The Guardian, The New Humanist and New Scientist. She is also a presenter on BBC radio. Her third book is Superior: The Return of Race Science, which was published in 2019.

"...with Superior, the science journalist and broadcaster tackles similarly pernicious untruths about race and eugenics. With rationalism and detailed research, Saini picks apart the dangerous arguments of race scientists and challenges their chilling resurgence in the 21st century." – Waterstones