Brigitta Zics' Pachinko Machine is a self learning algorithm with a built in sabotage mechanism, echoing life's balance between control and chance.

Pachinko Machine is a self-learning algorithmic drawing using rules of a pinball machine. The machine plays the game by itself in an automated setup. During the period of the exhibition the machine optimises its own performance through machine learning algorithm and become increasingly accurate in achieving the winning result. The only obstruction to fulfil the complete learning cycle is beyond the machines’ control, as there is a second intelligence embedded within the machine that aims to obstruct and obfuscate. It is a battle of algorithms.

The work aims to represent the walk of life and although we may be able to control some part it, there is always an element of chance that may destruct and encourages us to stray from our original path. 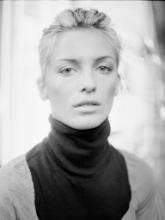 Brigitta Zics is an award-winning artist who creates works with visual and material sensitivity that seek to fashion new experiences. She works on the convergence of art and science and explores mixed-media forms, combining various techniques and emerging technologies. Her recent interests embrace experiential art, human perception and art, and the aesthetics of data and algorithms.

She graduated from the Hungarian University of Fine Art and the Academy of Media Arts Cologne, receiving scholarships from DAAD, Eötvös State Grant and Ludwig Award. She conducted her PhD research in art at the University of Wales.

From 2010 she became a practice-based PhD supervisor at Newcastle University, and from 2014 she has been Associate Professor and Acting Course Director at Ravensbourne University London.

Her works have been exhibited at Budapest, Berlin, London, Los Angeles, Monaco and Cologne and published at Leonardo Journal (MIT Press) and other academic journals (Springer, Taylor&Francis). In 2004 her work was nominated for the International Media Art Award at ZKM, and in 2005 she was selected for one of Europe Best Multimedia Artists. She is Fellow of the Royal Society of Arts.