Helen is currently working two days a week at Newton Park (every Wednesday and alternate Tuesdays and Fridays), and three days remotely due to the ongoing Coronavirus/Covid-19 pandemic. 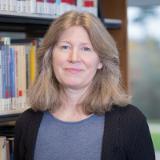 Key databases relevant for Film, Television, and Media are listed below.

A full list of all our databases can be found on the Databases page.

Here is a selection of relevant e-journals for Film, Television, and Media:

If you're looking for a particular e-journal title, use our e-journals search engine.