Whilst development at Locksbrook Road is well underway, a unique project has also taken place on the hoardings surrounding the site.

Tim Vyner, Bath Spa University’s Senior Lecturer in Illustration, and a team of the University’s alumni have created the longest mural in the South West to give passers-by something different to look at as they walk past the worksite.

The iconic former Herman Miller building, located along the Bath riverside, is being transformed into the University’s new campus for the Bath School of Art and Design, and having used the theme of ‘work’, Tim has captured the essence of the building’s industrial past and creative future.

“I wanted to use the hoardings to celebrate both the building’s history as a place of work and industry, and its future as an innovative space for students to thrive through making,” said Tim.

“I looked through archive photos from the time the factory floor was in use, alongside the current studios and workshops at Sion Hill and the Bath at Work Museum’s collection. These enabled me to create a series of industrial drawings that show the range of machinery and work places that have been used and will continue to be used there.

“The large-scale artworks were all created by hand, using industrial gloss paint on marine ply boards – these materials were chosen for durability but also to show the drawings were made by hand and not simply enlarged on a computer. The completed hoardings measure 160m in total, so it was a lot of work, but it was a great project to be part of.” 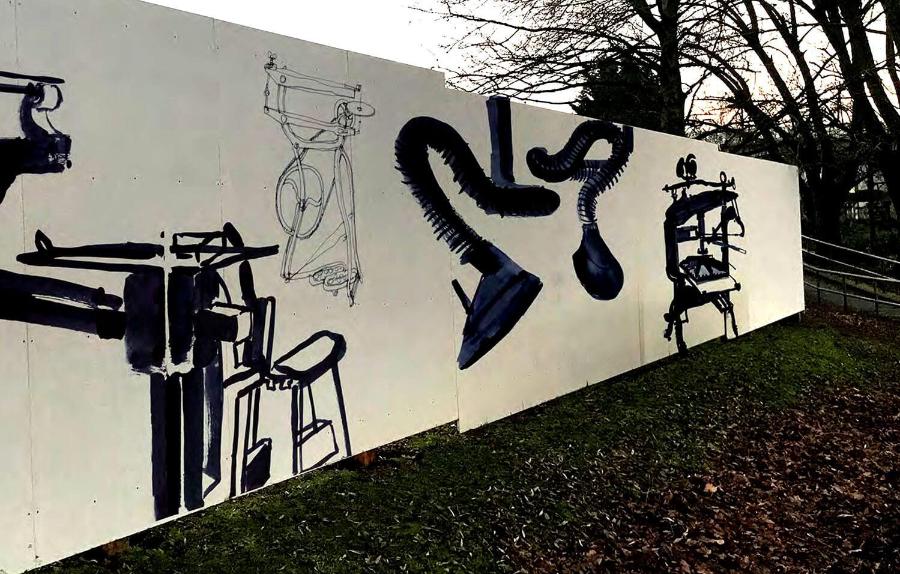 The fourth side of the hoarding was produced by Bath Spa graduates. Carl Godfrey, Tom Goldsworthy, David Gordon, Lucy Harper and Rebecca Bagley impressed the judges of a competition run by the Bath School of Art and Design with their brief that followed the theme of ‘work and industrial heritage’.

They proposed adorning the hoarding with advertising posters that have been used over the years by companies based in the city, and then adapted the brief to include the range of work produced by students of the School over the years. These included Degree Show posters, student competitions, public exhibitions and individual projects celebrating fine art, graphic design, illustration, photography, textiles and ceramics.

Carl, who graduated in 2014 with a BA in Graphic Communication, added: “It’s been fantastic to be involved in this project with Tim. It’s not often you get to work on such a large scale, on such a public facing piece of work, so it was a challenge but one that I really enjoyed.

“Our intention was to really represent all the inventive, industrious people and companies who have worked in and established themselves in Bath, and nod to the exciting future of the building and all the amazing artists who will develop in their time here.”