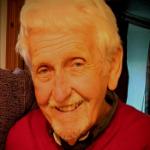 Professor George Odam was a much-loved and hugely influential figure in music education and taught at Bath Spa University for 34 years.

He was born in Suffolk and had a strong affection for the land and seascapes of that county as well as a deep love of the music of its most famous composer – Benjamin Britten. Britten encouraged him as a young composer and was a great influence on him: George later memorably conducted past and present students in a performance of the War Requiem in Bath Abbey. Among his friends and mentors were Michael Tippett, Alexander Goehr and John McCabe as well as the critic and musicologist Hans Keller.

George read Music, History of Art and English at the University of Manchester, and followed this with postgraduate study at the Institute of Education and the University of Southampton. He was Director of Music at Totton Grammar School, founded the National Scouts and Guides Symphony Orchestra and was an enthusiastic choral conductor and singer. In 1966 he joined what was then Bath Teacher Training College (later to become Bath College of Higher Education in 1975, and Bath Spa University in 2005) and in due course became Professor of Music and Music Education. He left in 1999 to take up a post as Head of Research and Staff Development at Guildhall School of Music and Drama where he was elected a Fellow on his retirement in 2007.

George remained characteristically busy and productive in his retirement, both as an external examiner at Falmouth University and Trinity Laban, and also as a Patient Governor at Bath’s Royal National Hospital for Rheumatic Diseases where he energetically supported a campaign to ‘save the Min’. In recent years his passion for music was enthusiastically communicated through his lecture series for the University of the Third Age.

His legacy will be preserved partly in his books: Silver Burdett Music is a comprehensive set of music education resources for Key Stages 1-3 of the National Curriculum, designed for use by teachers with and without any musical training. The Sounding Symbol (1995) called for a child-centred approach to music education, and opened the classroom to non-western music. He initiated, edited, and contributed to a series of some nine volumes in the Guildhall Research Studies Series, including The Reflective Conservatoire: Studies in Music Education (2005). Together with Jaume Rosset he co-wrote The Musician’s Body: a maintenance manual for peak performance (2007) which remains a touchstone for performers and arose partly from his connections with BAPAM (the British Association for Performing Arts Medicine).

The legacy also lies in his own compositions, which included songs, music for school ensembles, choral works and music for organ and for brass band.

Finally, and perhaps most fittingly, George’s legacy will be the ongoing work of his students as music educators. Those fortunate enough to have studied with him recall his kindness, enthusiasm and authority – he has been described as a "wise, kind and brilliant educator, philosopher and enabler". Just as Britten had been a mentor for him, he became a mentor for generations of musicians.

George is survived by his widow Penny, his son and daughter, Tim and Jo, and his grandchildren.