Future Pasts investigates how different ideas of the past, in particular imagined past relationships between people and nature, shape the futures being urgently created now in pursuit of ‘sustainability’ and the avoidance of ‘environmental crisis’.

Future Pasts explores tensions between traditional, indigenous and local conceptions of human/nature relationships, on the one hand, and new conceptions underlying modern market-based methods for creating ‘green’ futures, on the other. The project is based on in-depth field research in west Namibia - where three of our team members have long-term research experience - and in collaboration with our local institutional partners, especially the National Museum of Namibia, Save the Rhino Trust and Gobabeb Namib Research Institute.

Problems such as ‘environmental change’ and 'sustainability' are complex, requiring analysis that crosses disciplinary boundaries.

Our research, therefore, applies methods and theory from Cultural Geography, Ethnomusicology, Environmental History, Philosophy and Social Anthropology. Our field location encapsulates tensions present in many contemporary circumstances. Here, old and new conceptions of human/nature relationships are colliding spectacularly as resources such as uranium are extracted from land that is home to cultures with ancestral connections with these same places, as well as to highly valued (and endangered) animal and plant species.

All these strands of research have highlighted how understandings of ‘the natural environment’ are shaped by socio-cultural context, and have drawn attention to how historical and political dimensions underscore inclusions and exclusions in land distribution and environmental conservation policy. Oral history research and cultural landscapes mapping with indigenous Damara / ≠Nūkhoen and ||Ubun peoples in west Namibia, for example, revealed a large range of past settlement localities and environmental practices unrepresented and arguably un(der)valued in present policy, as well as illuminating how people in the past were able to sustain livelihoods in an extreme dryland environment. This research has been used to inform an Ancestral Land Commission appointed by the Namibian government in 2019, through provision of expert testimony to the Namidaman Traditional Authority in north-west Namibia and as a chapter in a major national review of the situation of Namibia’s indigenous and marginalised peoples.

Future Pasts research has been used to:

A major dimension of Future Pasts has been the use of non-text-based media to convey research findings. A multi-media exhibition called Future Pasts: Landscapes, Memory and Music in West Namibia has been created from the project and curated at Gallery 44AD in Bath, UK (2017) and COSDEF Community Arts Venue in Swakopmund, Namibia (2019).

In 2017 our film The Damara King’s Festival, made in collaboration with Mamokobo Video and Research and the Damara King’s Festival Organising Committee in Namibia, was short-listed for the AHRC’s Research in Film Awards (category ‘International Development: Mobilising Global Voices’). We are currently editing several new films based on oral history research by Sian Sullivan and Welhelmina Ganuses with Bristol-based Namibia film-expert Oliver Halsey. The first of these - called The Music Returns to Kai-as - is now online (see below also).

More recently, a media rich website has been created by Future Pasts researcher Chris Low to explore multiple dimensions of a culture hero or trickster figure spoken of by Khoekhoegowab-speaking Damara / ≠Nūkhoen, Nama and Hai||om, who overlaps strongly with wider San / Bushmen trickster figures from across southern Africa. Entitled Haiseb: Tracking a Namibian Folk Hero of the KhoeSan, the site explores how knowledge of Haiseb relates to landscape, song and movement.

Repeat photographs of the Khan River crossing in the Namib Desert. 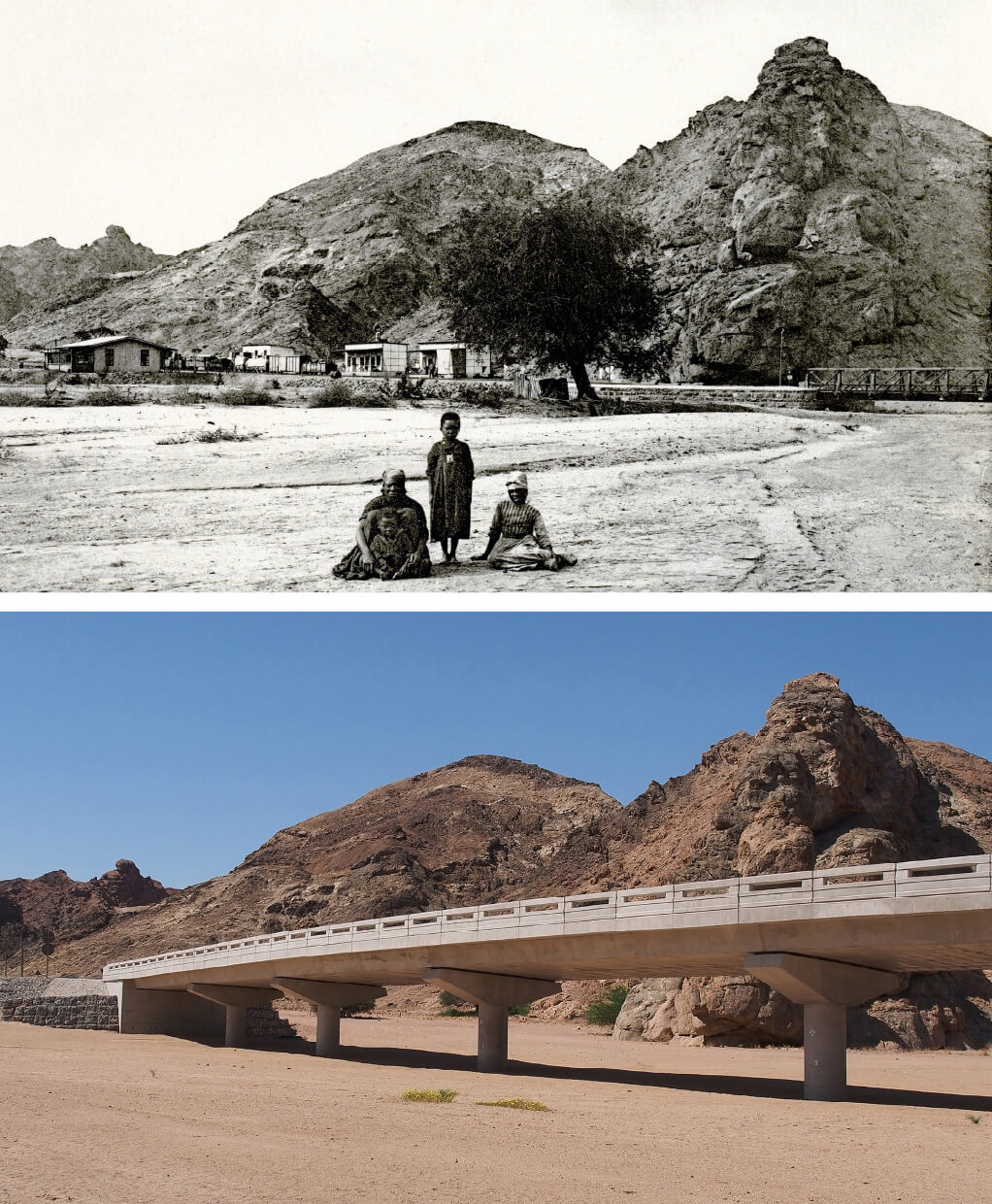 In the top image from 1906, Damara / ≠Nūkhoen women and children pose in the dry riverbed with the Khan Railway Station in the background. This narrow gauge railway was the first rail link between Swakopmund and Windhoek, built under German Colonial rule between 1897 and 1902.

Below, all traces of the original German railway have disappeared and been replaced by the private Khan Road Bridge. Built in 2015, the bridge was constructed to access and develop the new Husab Uranium Mine, owned by the China General Nuclear Power Group.

These repeat photographs are part of a dataset of matched historical and contemporary images for more than 100 sites throughout west Namibia, collated by Rick Rohde and extended through Future Pasts research.

Ruben !Nagu Sauneib Sanib and Sophia Opi |Awises stand with ||Khao-as mountain behind and to the side of them.

||Khao-as is said to be the place where ||Khao-a Dama came from. Today, ||Khao-as is far from where people are living, and it had been a long time since Ruben and Sophia were able to see the mountain. When we were there Sophia broke into an arus healing song that linked the ||Khao-a Dama lineage with ||Khao-as mountain. The song that came forth in this moment of returning to the mountain can be heard here.

Bath Spa academics collaborated on the project with:

This project has many linked publications and other research outputs: