Using the 1871 Dominion Land Survey and Google Earth's modern incarnation as its guide, Dominion explores what happens when cartographic projects fail to deliver.

The first of these is the Dominion Land Survey (DLS), a project initiated by the government of Canada in 1871 to render up the prairie landscape for settlement and agricultural production. The DLS still structures the prairie landscape today, but is rife with anomalies: sites where the survey was undermined by natural landforms, natural cycles like seasonal flooding, alternative forms of land tenure including the Métis river lot system, and errors and contradictions inherent in the survey system itself.

The second is Google Earth, which attempts today the seamless rendering of the Earth’s surface originally promised by projects like the DLS. However Google's Earth, too, is full of anomalies: inconsistencies in mapping, image resolution, accidental juxtapositions of images from different times, and malfunctioning digital topographies.

Dominion explores the failures of both of these projects, using each as a lens on the other. Aerial, satellite and ground-level Google Earth imagery of Western Canada's prairies has been harvested, edited and superimposed in flows of image that intend to raise a question. It has been centuries, now, that we have been promised a perfectly transparent map of the Earth; but why do projects that try to achieve this, inevitably seem to fail?

The creation of Dominion was supported by the following organisations:

Dominion has been installed at the Winnipeg Design Festival, (Sept 2018); the University of Manitoba Atmosphere Symposium (Jan 2017), and Culture Days/Nuit Blanche (Sept 2017), all in Winnipeg, Manitoba, not far from the origin of the DLS. 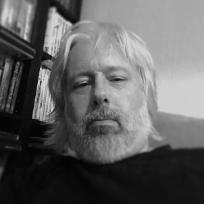 Lawrence Bird practices in architecture, urban design, and the visual arts. A fascination with images of cities and geography, and relationships between image and material, informs his art practise.

His work has been installed in Winnipeg, Halifax, Toronto, Montréal, London (UK), and Brussels, with funding from Manitoba Arts Council, the Winnipeg Arts Council, and the Canada Council for the Arts. Lawrence has studied and practised in the USA, Canada, the UK, and Japan.

He has taught at McGill University, University of Manitoba, Kanazawa International Design Institute (Japan), and Harvard Kennedy School of Government.

His writing has appeared in Chora, Leonardo, Critical Planning, and Canadian Architect, and has contributed interviews on media, art and politics to furtherfield.org, among other venues. In design practise he works for pico ARCHITECTURE inc., a small Canadian firm dedicated to ethical and sustainable practise.

Lawrence's work can be found below: