The research aims to establish a set of principles which govern the structure and application of multipart series in music and visual art. The idea of a series in this context is best defined by Sol LeWitt, who states

‘Serial compositions are multipart pieces with regulated changes. The differences between the parts are the subject of the composition. If some parts remain constant it is to punctuate the changes …The autonomous parts are units, rows, sets, or any logical division that would be read as a complete thought. The series would be read by the viewer in a linear or narrative manner even though in its final form many of these sets would be operating simultaneously, making comprehension difficult.’

“Through examining the work of these composers and artists, the aim of the project is to establish a set of principles that are common to their serial work.”

This approach has become central to various bodies of visual art since the 1960s, particularly monochrome and colour-field painting, some conceptual art, and minimalism in its various forms. Within music, it is most evident in the work of the central European and American Wandelweiser group of composers.Founded by Antoine Beuger and Burkhard Schlothauer in 1992, Wandelweiser have defined a clear aesthetic whose resonance has been critical to a continued exploration of new compositional ground internationally over the past decade. Their work is distinctive and makes few compromises: it deals with extremes and archetypes. Schlothauer summarises the characteristics of the Wandelweiser composers’ work succinctly in his essay ‘Etwas über Wandelweiser’, saying that their music is generally very quiet and that silence has a large share of the often extended performance durations. Generally there is little conventional drama and the presentation of sound material is very clear: harmony, rhythm and melody play either a subordinate role or none at all. These composers also make frequent reference to the work of visual artists. In Beuger’s work for example, the series [first – fourth] music for marcia hafif(1994-2002) draws on the serial structure of Hafif’s monochromes. Most of Hafif’s work is in series, some complete and some ongoing. For example, herExtended Gray Scale (1972-3) comprised 105 ordered grey paintings and was complete when she felt she was unable to distinguish a new shade of grey. Other artists whose work underpins this study include Sol LeWitt, whose series of wall drawings have informed my own compositional approach to interlinked pieces, and Carl Andre, whose floor sculptures represent, alongside Dan Flavin’s neon light work, perhaps the most consistent extended application of modularity. 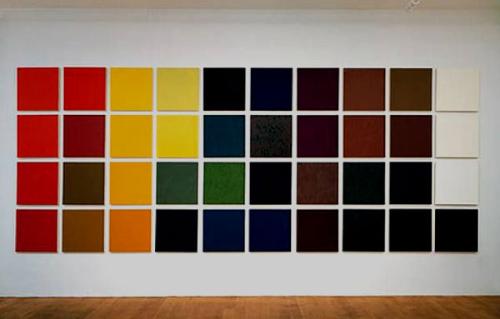 Through examining the work of these composers and artists, the aim of the project is to establish a set of principles that are common to their serial work. These will be articulated through a journal article and edited volume of Contemporary Music Review, focusing on the Wandelweiser composers (the first major study in English), and a series of composition projects resulting in pieces for Basel Sinfonietta, [rout], and Simon Limbrick. These compositions will focus on the further expansion of Saunders’ existing series, and the development of new ones, both of which will be informed by the parallel musicological research. Specifically, the criteria determined by the analysis of other work will shape some of his decision-making when planning new multipart work: it is the nature of this mode of working that decisions made at the macro-level have major ramifications for later development of sub-pieces. The two ensemble pieces will be related as part of a new series that emerges from the principles determined through the contextual research, and which is informed by his current series and earlier modular piece #[unassigned]. The research will therefore benefit practitioners, musicologists and art theorists with an interest in serial and modular structures, and audiences seeking to engage with these concepts and work.