Our research events are open to Bath Spa staff and students alike, as well as to the general public.

If you'd like to organise an event with us, please get in touch with our director, Richard Johnson (r.johnson@bathspa.ac.uk).

Our 2021/22 Hazard, Risk and Disaster (HRD) Research Lecture Series will be held online. Please visit the event pages below for more information and a booking form to register your place.

Professor Mark G Macklin is an authority on river systems and global environmental change, and a multi-award-winning physical geographer.

In this presentation the concept of unhealthy rivers was considered from catchment science and hydromorphology perspectives in the context of ecosystem and human health.

Iceland in the Anthropocene 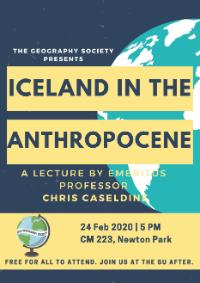 Presented by the Geography Society

Free for all to attend. Join us at the SU after.

Chris Caseldine is Emeritus Professor of Quaternary Environmental Change at the University of Exeter.

Chris first visited Iceland in 1975 to carry out research on glacial changes around southern Vatnajökull and since then has undertaken research on Holocene climatic change using both glacial data and analysis of lake cores, especially from sites in northern and western Iceland. Results from these have appeared in over 30 research papers and two edited books.

Chris is currently completing an interdisciplinary-based book on understanding the physical landscape of Iceland, which is due out in 2021.

Geologists may be lukewarm about the reality of an Anthropocene but Iceland provides an opportunity to look at Anthropocene change in action.

After briefly showing how it may be possible to identify the shift to this proposed new epoch in Iceland, the idea of the Anthropocene is used to examine three key environmental challenges that Iceland is currently facing:

In considering these issues, an opportunity will be taken to look more widely at what is traditionally known as the Land of Ice and Fire, and there will be passing reference to Sigur Rós and some idiosyncratic Icelandic cinema.

Dr George Adamson – The Co-Production of El Niño and Society

The El Niño Southern Oscillation is often described as the most important source of natural climatic variability on decadal timescales. Yet the phenomenon can be somewhat of a contradiction. Apparently successful forecasts of the event up to 6 months in advance have been hailed as a key success of long-range forecasts, yet every El Niño (and La Niña) event produces surprising characteristics and it is apparently become more difficult – not easier – to understand what the phenomenon is. Research over the last decade has suggested that there may be several El Niños, not just one.

This presentation will trace the historical developments that led to the construction of the phenomenon that we now call the El Niño Southern Oscillation. It will argue that our current understanding of the phenomenon is related as much to historical accident as it is to ‘objective’ science. As such it will explore the concept of ‘path dependency’ in earth system science.

George Adamson is a Lecturer in Geography at King’s College London. His research explores the production and use of climate knowledge in a number of different historical and contemporary contexts. Particular foci are the El Niño Southern Oscillation, hazard early warning, and how adaptation options are constrained by historical processes and path dependencies.